Yesterday marked the beginning of Lent with Ash Wednesday. We went to the evening service where we shared a meal and then had the imposition of ashes- something that Sweet Pea liked and Little Bird was very unsure of.
Today we began setting up some of our Lent stuff- we have the cross for going over the six Sundays of Lent on our table now- although it still needs a purple ribbon tied around the middle. 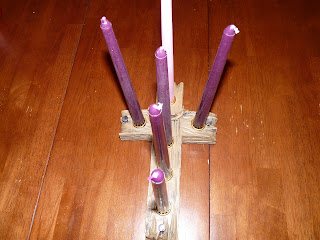 We also got a Resurrection set- it's out right now so we can see it, even though it's unseasonable. I'd debating putting it away until Easter or covering it with a purple cloth- we'll see. 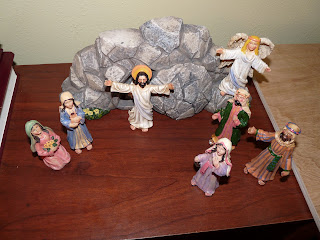 Also pictured, although it's not specifically Lenten, is our devotional line up. One top are two of Luther's Small Catechism, then a Bible, then Luther's Family Devotions, a copy of the Lutheran Service Book, and then the new Treasury of Daily Prayer. 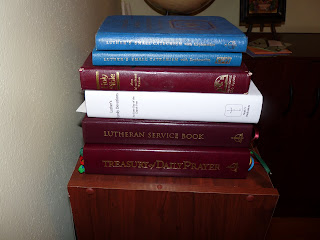 School is continuing as normal, too. We started Singapore's Primary 1A this week- I am really, really glad that I got the Home Instructor's Guide. The first lesson was just numbers 1-10- and me cutting out about a million flash cards- but I think we'll enjoy this as much or more then we did Earlybird Mathematics.

Also completed now is Cursive First. It's important to note that it's our second time through, and I believe our last. We'll keep it around for Little bird when she's ready, and for review as needed for Sweet Pea, but it's a great feeling to be finished with handwriting instruction for now! Yay, Sweet Pea!

We're one week in on the great seed project, but so far none have popped a seedling above the surface yet. Still anxiously waiting!

Why I am not a fan of Reform Mathematics

I could have titled this a lot of different things, but that's succinct and polite. Two personal goals, met!
By Reform Math I refer specifically to the idea of math instruction that came from the National Council of Teachers of Mathematics in 1989. These standards were revised in 2000. The emphasis in this new mathematical conceptual thinking and problem solving instead of the arithmetic most of us were taught in schools with algorithms for problem solving and an emphasis on memorization and solid knowledge of math facts.
Now, this doesn't sound bad yet. Conceptual thinking? Problem solving? Who doesn't want their child to think beyond just 1+1 and into the concept? Problem solving is important in all subjects! America has lagged behind other nations for a while mathematically- so maybe this is what we need! The idea of moving students past the need to always solve problems in one, regimented way sounds like a decent plan of attack on moving scores and comprehension forward.
So what's my problem? Other then being a subversive homeschooler? First- watch this.
http://www.youtube.com/watch?v=Tr1qee-bTZI It's a little long, but it works through actual examples from teacher's manuals from two of the most popular reform math programs being used by schools- Everyday Mathematics and Investigations in Numbers, Data, and Space or TERC Investigations.
Personally, I am strongly opposed to the early and frequent use of calculators in the early years of arithmetic. I am in favor of drilling until math facts are solid. I also find the new ways of solving multiplication and division featured to be cumbersome, confusing, and something that I don't care to teach my children.
I know that there are some strong proponents of the new math, and that these programs have fans who have achieved a personal level of education in the fields of education and mathematics far exceeding any claims of my own. I'm not here to besmirch the people involved in the creation of these ideas or programs- just to say that for me and my family, and a lot of other people that I've talked to about this, it's not a good fit.
I'm also interested in the long term track record of these ideas- how will kids stack up once they reach university level? How will they be in the job market, the workplace, at home with their finances?
Anyone else with any opinions about reformed math?
Posted by The Mama at 7:12 PM 1 comment:

We've been talking about plants and seeds in science, and the perfect way to really learn about that at the ages of my children (or any age, in my opinion) is by planting seeds. Today we planted tomatoes, cucumbers, and snap peas. Since our weather is still cold, we did it inside on my kitchen floor. Both girls had a lot of fun digging around in the dirt, comparing seed sizes, and then planting and watering. 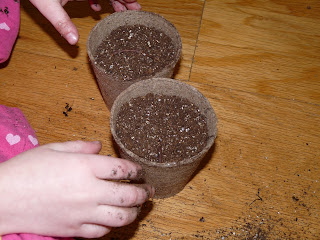 I'll have Sweet Pea draw pictures of her plants' progress once there is something to show. 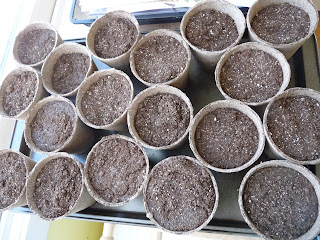 I was looking at my binder and apparently this is NOT week 24. It's 23. oops!
Anyway, that embarrassing gaffe aside, the week is going well.
We did page 46 in Cursive First- almost done! Sweet Pea's assignment was writing her name 6 times, neatly, so you'll have to excuse the lack of pictures on that. ;)

We finished Earlybird Math today! Yay! We'll spend the rest of the week reviewing ordinal numbers, money, time, and easy story problems, then next week we'll begin lesson one of Primary Mathematics. I sat down last night with my planner, anticipating the need to map it all out- only to find that in the Home Instructor's Guide it's all been done for me. What a nice feeling! We'll be using the Instructor's Guide, the textbook, and the workbook. We'll also continue to supplement with Math Mammoth's 1st grade materials. 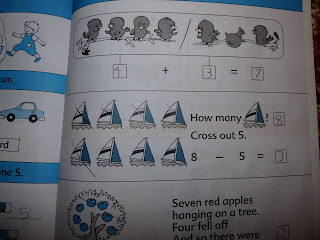 Another spelling test today from McGuffey's. I think that's going to be a good way to watch how she's forming her letters while I decide if handwriting will continue as a subject, or just a part of other work. 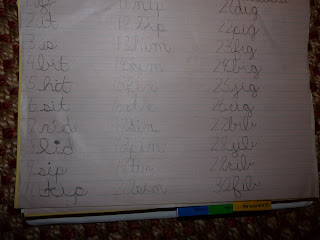 I think that what confused me last post on what week we are on is that we are working through week 24 in Writing with Ease. Somehow we got ahead. 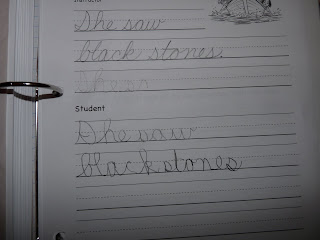 Tomorrow I think we'll get in some science and history, and more phonics. Not having actual math to work on will open up a good chunk of our school time!
Posted by The Mama at 7:11 PM No comments:

I'm still working on compiling everything I want/ need to get done for Lent for our family, but I thought that I'd share the ideas that I have together so far.
A lot of this has been pulled together and adapted from many sources. Many of the ideas were Catholic and have been adopted to fit a more Lutheran piety.

Ideas in no particular order:
That's the main bulk of what I have right now. As items get made, I'll post pictures.
Anyone else doing anything for Lent?
Posted by The Mama at 7:33 PM 1 comment:

I know that I said not too long ago that we'd be taking a hiatus from scheduled schooling. Apparently, it's not yet time. Taking that part of the schedule away actually led to more chaos and stress during the day, so back at it we are!
We started the morning with Spelling Workout. I am definitely not continuing this next year, but it seems wasteful to not use what we have, as long as Sweet Pea doesn't hate it. She's amenable, so we're still chugging along. 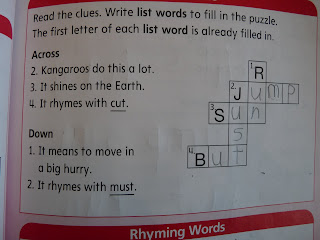 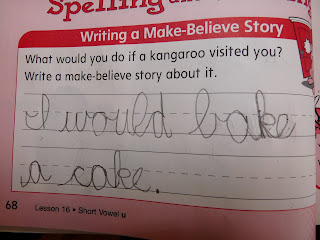 After that we worked on Earlybird more. We did two of the three money lessons, and I think tomorrow we'll do the third. That leaves the review pages and we'll be done! I will say that workbook pages make a poor substitute with money- we have a Melissa and Doug set of play money that I brought out and that made much more sense. We'll continue using that to play store- I think that's the best way to do money at this age. 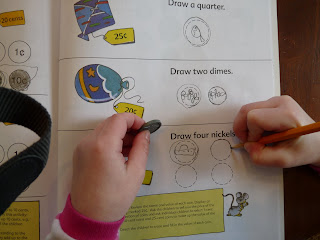 We did the first part of week 24 in our writing program. 12 more weeks and we're finished with this, too!

Sweet Pea did a page from Cursive First next. We are almost finished with this, as well. I'm not sure what the best tactic is at that point- this is the second run through of all the pages, and I don't really want to be doing a third. I don't know if we should just let a handwriting program go for now, or look for another one, or just correct penmanship in the course of other Language Arts work. I also don't know physically how much neater her writing can get at this age- she is still five.

Later today we'll do the Ordinary Parent's Guide and catechism, and that'll round out the day.

Sweet Pea's new book that she is reading to herself (with help as needed) is Little House on Rocky Ridge.
Posted by The Mama at 12:21 PM No comments:

I think that we will finish Singapore Earlybird 2B this week. It's a little bittersweet- this is one of the very first programs that we started at the beginning of the homeschool journey. We started it back when Sweet Pea was four along with the Rod and Staff Preschool series. It's served us well, taking us from beginning familiarity with numbers and shapes to addition and subtraction.
When we started the Earlybird series we combined it with Miquon, but that fell by the wayside pretty quickly because it just wasn't a good fit here. Singapore stuck, and we recently added Math Mammoth, which I think will also stick for a while.
We're not done with math for the year after this, though. We'll roll into Primary Mathematics 1A right away. I'm pretty sure that Sweet Pea will be ready for it.
It's exciting to be moving forward in such an important subject!
Posted by The Mama at 10:41 PM No comments:

We are rapidly hurtling toward the Lenten season, and since we follow the one year lectionary my family is currently in pre-Lent. I'm looking around and trying to get things in order so we can incorporate some Lenten activities into our lives. It was easier during Advent- more established family and Church traditions guided that. Lent is a tougher nut for me to crack.
Others who celebrate Lent (that sounds wrong, but I don't know how to rephrase) have any family traditions? We currently have Luther's family devotion book, but I'm looking for something more.
Posted by The Mama at 9:45 PM 1 comment:

My Stick Family from WiddlyTinks.com